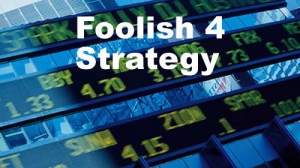 The Motley Fool developed a derivative of the Dow 10 Strategy called the “Foolish Four — RP Variation”. This strategy, originally known as the RP Variation looks for likely turnaround stocks but uses a ratio procedure to combine the effects of low price and high yield. The actual selection procedure is to divide the yield by the square root of the price. This gives you a ratio for each stock. You then rank the Dow stocks by this ratio from highest to lowest. (Alternate: If you find the math easier, you can square the yield and divide by the price instead. The numbers will be different, but the stocks will be ranked in the same order.) Omit the stock with the highest ratio. Then buy the next four stocks in equal dollar amounts.